Back to Merlin Home
Back to Knowledge Base

Are the Cartek Isolators FIA approved?

Unlike race seats, harnesses and fire extinguishers, the FIA does not have an approval procedure for Master Switches. However, most FIA race and rally championships require cars to be fitted with a spark-proof master switch to isolate the battery from all electrical systems and stop the engine. The Cartek range of Battery Isolators meets these requirements.

How do the Cartek Isolators work?

The Solid State Isolator switches from Cartek contain two isolation circuits. The first breaks the connection between the negative side of the vehicle’s battery form the chassis/earth, thereby isolating the battery power from all electrical circuits, while the second cuts power to the engine electrics and thereby stops the engine running.

Cartek produce two types of Battery Isolator known as GT and XS. Both systems isolate the battery from all electrical circuits (in accordance with FIA requirements) by disconnecting the negative terminal of the battery from the chassis/earth. However, the main difference between these two units is the method used to stop the engine.

The Cartek GT unit has a 30 Amp switched power output which can be used as the main power feed for most ECU’s and/or ignition systems.

The Cartek XS unit outputs a low current ‘Ignition Off’ signal which is compatible with most motorsport ECU’s and PDM’s. This method of engine kill means that the XS unit is smaller and light than the GT and incorporates a sealed, circular connector.

Solid Sate means no moving parts, all power switching is fully electronic. Early types of electrical isolation were by large mechanical master switches, while more modern systems have utilised electro-mechanical solenoids. Both of these methods of battery isolation contain mechanical electrical contacts which, due to the combination of high electrical current and the shocks and vibration normally found in the race car environment, sparking between the contacts occurs which often results in contact erosion and eventual failure. The Cartek range of Solid State battery isolators are also fitted with a hard setting resin which prevents any ingress of dust, dirt or water therefore vastly improving strength and reliability.

How are the Switches operated?

The Cartek Battery Isolator systems can be controlled by any number of switches, although the usual configuration is one internal on/off switch and one external kill button. However, the Cartek system also allows multiple kill switches to be installed and the fitment of two external kill buttons (one on each side of the car) has become a popular safety feature.

All switches/push buttons are connected to the isolator via light weight, low current wiring and configured such that the Cartek Battery Isolator will automatically turn off should any of the wire connections become broken in an accident. 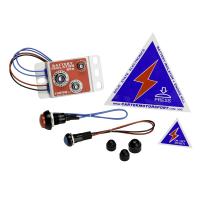 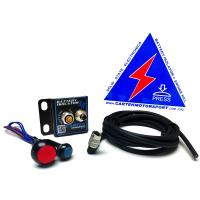 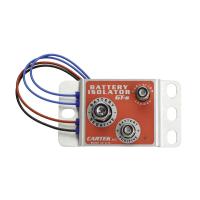 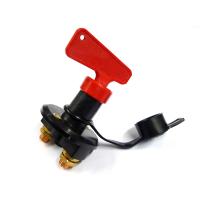